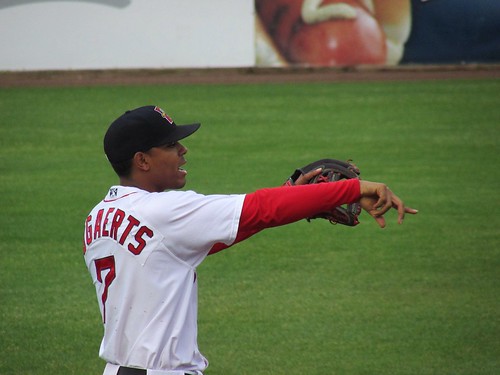 In his first 25 games last season, Xander Bogaerts got on base at a .387 clip. He didn’t show much pop, hitting one home run and slugging a mere .378, but that was good enough for a 119 OPS+. He was twenty percent better than the average player at the position offensively, in other words. Over the next 28 games he played in May, he was even better. The OBP climbed, the power made an appearance and all of a sudden he wasn’t 19% better, he was 52% better than the average shortstop. Given that we all know what happened after that, there’s no need to document his implosion. And I’ll leave the post-mortem to the better qualified; there are many looking to deconstruct his slide with an eye at determining his current value.

The more interesting question to me at the moment is what if it had never happened?

It’s obviously not reasonable to assume that he’d keep putting up a 152 OPS+, but what if Bogaerts had put up a line closer to his first month? What changes this offseason? Are Ramirez and Sandoval still acquired?

To make that question harder to understand, as long as we’re talking hypotheticals, what about Jackie Bradley Jr? The best centerfielder I’ve ever seen in person set new records for futility at the plate, and if Bogaerts’ slump was an implosion JBJ’s season at the plate was a post-apocalyptical nuclear wasteland. Over 127 games and 423 plate appearances, Bradley put up a 53 OPS+, making him almost 50% worse than the average regular. His defense is sublime, but nothing can make that up.

And then there’s Middlebrooks. I’ve never been much of a believer: the power is clearly there – or was, until last season – but I’m unconvinced he’ll ever make enough contact or have the plate discipline to get to it. ZIPS was not optimistic, forecasting a .255/.292/.434 line for the third baseman. The result? He didn’t come close. Even granting that injuries played a part, his .191/.256/.265 (48 OPS+) was not only completely unacceptable but a serious regression even from his miserable prior season (87 OPS+).

Middlebrooks was a risk, obviously, based on his erratic track record. But the odd thing about Bogaerts and Bradley’s performances is that they were difficult to see coming. Both players are young, true. And young players struggle – maybe now more than ever with all of the advances in scouting, the ubiquity of velocity, a larger strike zone and an unprecedented volume of defensive shifts. Certainly Bogaerts and Bradley weren’t the only highly touted rookies to struggle.

But last year’s roster didn’t include much in the way of safety nets, unless you count what’s left of Grady Sizemore. Bogaerts and Middlebrooks started out of the gate, and Bradley started 23 games the first month. Even after stumbling, they were run back out there day after day after day until Bradley was mercifully sent down, Middlebrooks got hurt and Bogaerts was concussed. Collectively they were worth a negative half win: Bogaerts was 0.4, Bradley -0.1 (which tells you just how good his defense was), Middlebrooks -0.8 (-0.5 total). Their respective ZIPS forecasts, meanwhile, were 0.9, 1.6, 1.8 (4.3 total).

Between them, then, you’re looking at effectively a five win swing. The bad news for the Red Sox is that as bad as the three were, they weren’t the only problem. They weren’t an 85 win team that finished just outside a 90 win playoff threshold; they were a 71 win team that even with the benefit of an additional five wins would be well under .500, and out of the playoffs.

Still, it’s difficult to see recent signings as anything other than indictments of players and roster alike. If Bradley Jr even came close to his forecast, do the Red Sox hand $72M to a 28 year old Cuban who runs well but like his countryman Cespedes, may or may not get on base? Seems unlikely. Likewise with Sandoval. Even if you buy fully into the “insensitivity to the opposition theory” theory about this signing – and it’s not clear how his swing-first-and-ask-questions-later approach will age – if the team believed Middlebrooks was or would become what some once thought he might, again, that’s probably money the club deploys elsewhere. As for Ramirez, well, we’re looking at a club whose outfield collectively hit 26 home runs last year. Desperate times call for desperate measures.

Whatever the explanations, then, whatever the cause, the Red Sox offseason to date is in effect one long indictment of our ability to produce major league caliber offensive players. The kids failed, so we dropped $255M on two outfielders and a third baseman. So much for being a draft and development-oriented organization that eschewed major free agent spending.

The funny thing, however, is that the Red Sox 2014 offseason is at the same time a validation of the Red Sox minor league system.

The same $255M figure that serves as a stark reminder of the difficulty of transitioning players from the minors to the majors ensures that the club will be heavily reliant moving forward on young, cost effective players. In other words, to use the much beleaguered turn of phrase, this can be seen essentially as a bridge year. The club cannot bear the risk it did last year, coming off a title, of relying too heavily on its prospects, so by investing in Castillo/Ramirez/Sandoval, it hopes to both provide them with the cover they need to develop, or in the case of players like Bradley, Cechinni or Middlebrooks, rebuild their value such that they can be converted into talent at areas of need.

As Cherington said today on MLB Radio, the team does have a budget, and even if they were somehow able to plug the gaping hole in their rotation cost effectively via trade rather than dropping big dollars on Lester, the premium attached to free agents makes it an unsustainable long term strategy. You can plug holes with the likes of Ramirez or Sandoval, but you certainly can’t field one at every position. The only way the money works is if Bogaerts and now Betts are able to assume positions of importance while making a relative pittance. It may not be comfortable to be paying Sandoval $19M a year, but you feel better if the combination of he and Bogaerts costs you $20M.

In a perfect world, of course, none of the above is necessary, and Middlebrooks would be looking at another three years of hitting bombs and we could all look forward to watching Bradley Jr teleport himself to the precise spot a sinking liner lands. But it’s not a perfect world, and the 2014 Red Sox offseason seems to be trying to make the best of the minor league system’s failures while counting on its successes moving forward.