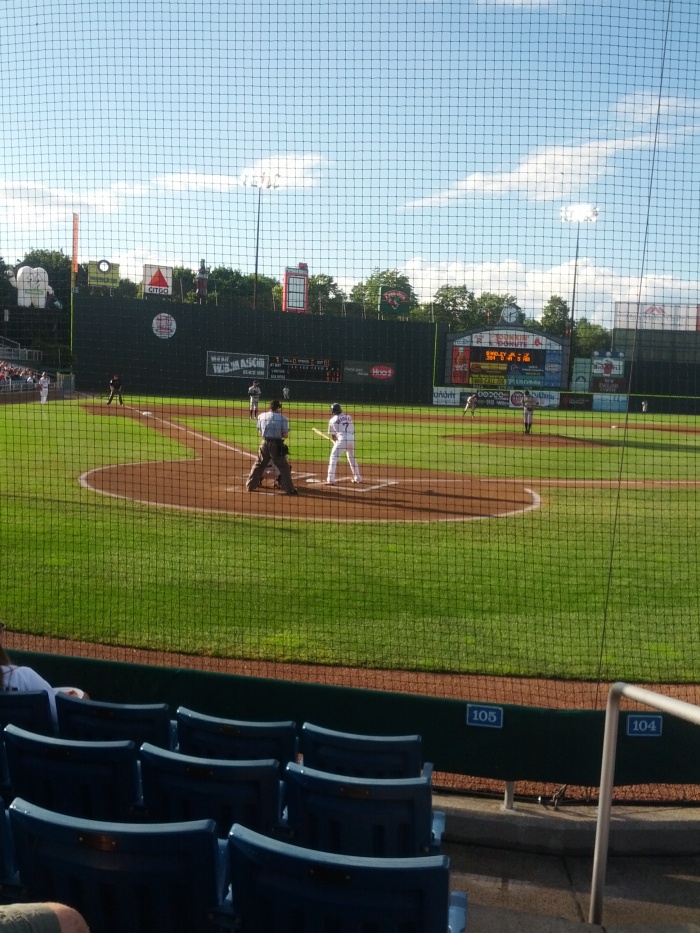 “The case for Bradley is simple: He’s been the best player in camp since the day he arrived. After going 3-for-4 with a homer on Monday and adding another hit in his lone at-bat yesterday, he finds himself hitting .536 (15-for-28). Add flawless outfield defense, the fact that he’s homegrown, and the lack of compelling alternatives, and this decision should be a slam dunk.” – John Tomase, “Jackie Bradley’s Time is Now“

Like many fans and reporters alike, John Tomase of the Herald has apparently been swept up in the Jackie Bradley Jr hysteria that is sweeping Boston at the moment. Even implying that the Red Sox should send JBJ to the minors elicits reactions like these:

@sogrady @GlobeChadFinn I'm for playing time over service time any day of the week If Ells goes in 2014 better JBJ has his feet wet.#redsox

It’s easy to see why people are excited. From his appearances on everyone’s top prospects lists to his .423 OBP over two minor league seasons to his defense to his personality, it’s hard not to like the kid. As Chad Finn suggests, he might be “the fun story of camp.”

While it’s ok to get excited, however, it’s important not to get carried away. ZIPS, for example, believes that Bradley would produce something like a .249/.329/.367 in the majors right now. Given his defense and speed on the bases, that might actually still be a useful player. A savior, however, it is not.

“But,” you say, “he’s hitting .536/.629/.714 this spring!” Well, let’s talk about Spring Training statistics for a minute. Working as far back as MLB’s statistics allow us to go – 2006 – here are other notable Spring Training performances.

No, the takeaway here is simple: spring training stats are meaningless. Basing decisions off of them, therefore, is foolish. And if you take away the spring numbers-based belief that he’ll be a well above average offensive player, the case for starting him in the majors collapses.

Having never played above AA – and having slumped noticeably in the second half there last year (.350/.424/.463 vs .228/.346/.423) – the 23 year old is likely to benefit from more consistent at bats in the minors. Just as important are questions of service time. While some dismiss these as minor issues, if you believe that Jackie Bradley Jr is the second coming, exposing him to free agency a year earlier than you have to is silly.

The only rational course of action for the club is to start him in the minors, likely at AAA. If he struggles, as could easily happen (development is rarely linear, remember), he would do so in an environment where the focus is on development rather than wins and losses. And if he puts up a 1.343 with Pawtucket, you’ve sacrified a few weeks of playing time to gain a year of service time. In a year where even the most optimistic forecasts have the Red Sox competing for one of the two wild card berths, that’s not only the logical choice, it’s the only choice.

Jackie Bradley Jr is a true prospect, and has done nothing in his career to argue that he won’t be an adequate successor to Ellsbury, but please, skip the Mike Trout comparisons. As a 20 year old, Trout put up a .326/.399/.564 line in the American League. When he was 20, Bradley was hitting .368/.473/.587 – for the University of South Carolina.

Trout couldn’t wait, but Bradley Jr can. So can we.

4 thoughts on “Jackie Bradley’s Time is Not Now”